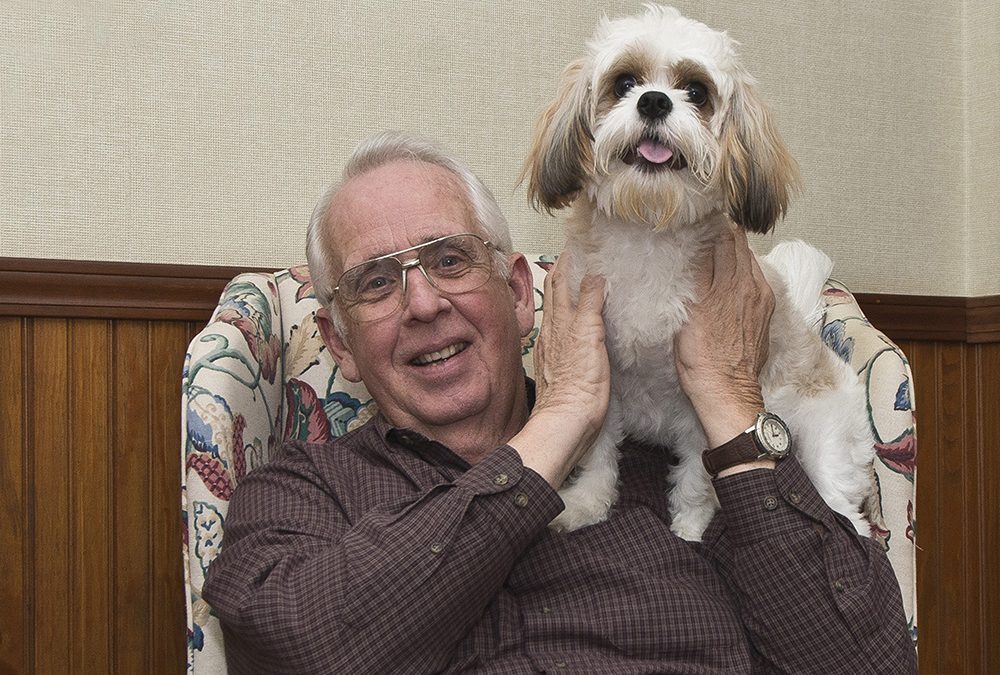 In our newsletters, we feature short profiles of GNPA members from across the state. In this issue, it’s Lowell Sims, of the Smyrna Chapter.

When did you become a GNPA member?  I joined during the initial meeting of GNPA. I believe it was 2010.

What is your occupation?  Retired since May 2002. I’m the former IT/Administrative Services Director for Hartford Financial Service’s Omni Automobile Insurance Divisions.

How did you get into photography?  Soon after my wife and I married, we planned a trip to Lookout Mountain. I purchased a point-and-shoot camera for pictures and I’ve been hooked ever since,

What are your favorite photography subjects?  Birds are at the top of my list of favorites.  I also like to photograph dragonflies, animals, amphibians, flowers and landscapes.

What would be your photographic “dream trip”?  Galapagos Islands (#1) and Machu Picchu, Peru (#2).

Which camera body and lenses do you use most often?  Most of my DSLR life, I’ve used a Nikon body with a 150-600 mm lens, but now I’ve moved to a Sony A7Rlll with a 200-600 mm zoom lens and only recently obtained a Sony 100-400 mm G Master lens. I have an adapter that accepts all my Nikon brand lens on the Sony body.

What are your go-to websites for photography information?  Mark Galer on YouTube is probably my first “go to” for tutorials on Sony equipment. I would still be fumbling through Sony’s menu system were it not for him explaining various set-ups (and I still have a lot to learn).

Mark Denny is another favorite on YouTube. His tutorials are geared more toward technique than equipment. He once was a Sony user but has recently switched to Olympus.

Another weekly subscription is Digital Photography School’s newsletter. Sometime it is quite rudimentary, but occasionally I find a little gem to “chew on.”

Steve Perry’s Back Country Gallery is a really good source of knowledge on how cameras work and setup advise. He has several e-books available that explain various camera functions (Nikon equipment exclusively).

Have any photographers inspired you?  I am in sheer awe of Arthur Morris’s ability to photograph birds. I am totally incapable of capturing bird photos that in any way come close to rivaling the quality of his images. Art Wolfe is another photographer I admire a lot. Leonard Lee Rue III through his book “How I Photograph Birds and Wildlife” showed me how I didn’t have to go to the forest or nature area to photograph birds.

Something interesting about you that most people do not know:  When I was a lad we played “livestock technicians and indigenous people” (Cowboys and Indians) and I had a keen interest in archery. In the early 1970s, I joined an archery club (Tomo Chi archery club) and won my first tournament (by default – I was the sole competitor in my basic bowhunter class). I was embarrassed to step forward to receive my winner’s medal and the club president added insult by saying facetiously, “Come back and join us again, we’ll try to be more competitive.” He had just won the “Pro” class. Five years later, not only did I trounce him in a similar club tournament, I was Southeastern Outdoor Field Archery Champion (1977 Clemson, SC), Indoor S.E. Runner up Champion (1978 Greenville, SC), 5-time Georgia State Champion (1975-79) and Georgia State Archer of the Year in 1979.”\

Where are you from?  I hail from South Georgia, born in extremely humble beginnings in Sparks. If anyone is old enough to remember going to Florida via US 41 in the late 1940s to mid-1950s, perhaps you remember Sparks and Adel were like Atlanta and Decatur. Without a sign you couldn’t tell when you left one city and entered the other. The favorite local quip was “Adel was so close to hell you could see Sparks.” In 1948 we moved to Tifton and after a relatively short tenure there we relocated to Ty (an outlying community of Tifton pronounced “tie,” an Indian name derived from the Ti bush that grew along nearby Ty Creek) where we lived until I graduated high school and moved to Atlanta. My favorite quip about Ty is “both ‘Entering Ty’ and ‘Leaving Ty’ signs were on the same post.”

Tell us a little about the photos you have provided: 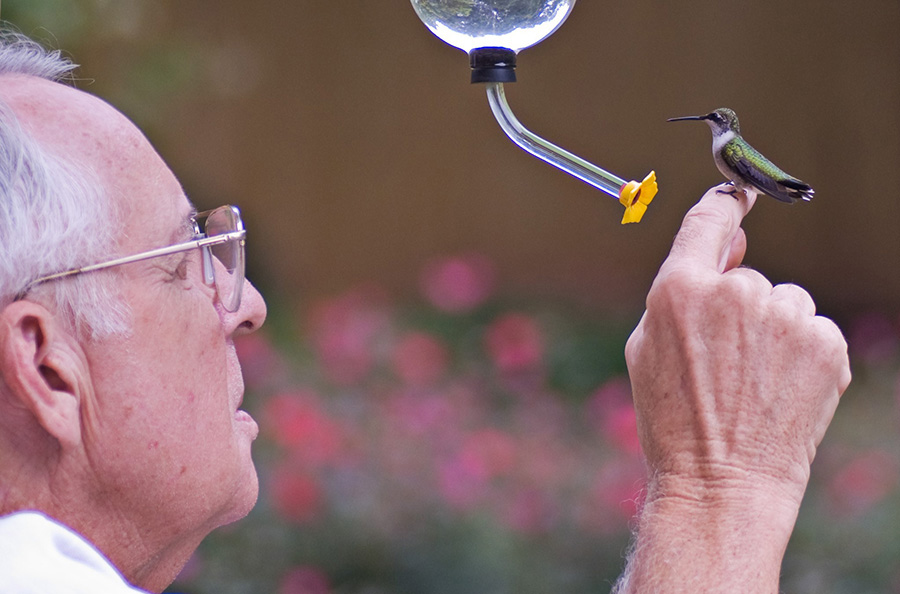 Hummer On My Finger: Without gloating or bragging, I think this is an amazing photograph. I marshaled at The Tour Championship at East Lake for several years, and the year I took this photo our uniform included a bright red cap. I came home the last day of the tournament and sat down on the deck with my red hat on. Before long I was being buzzed by hummingbirds looking for a place to drink nectar. They were so close I could feel the wind generated by their wing beats. I quickly erected a feeder stand, attached it to the deck railing, set up my camera on a tripod with a wireless remote attached and covered all the fake flower feeder outlets but one. Sitting next to the feeder and resting my arm on the deck rail, I positioned my finger near the only flower outlet. After 4-5 approaches, a hummer finally lit on my finger and I began to fire away with my remote. Several people accused me of “PhotoShopping” the bird onto my finger, but the only “PhotoShopping” of this photo was cloning out the feeder. 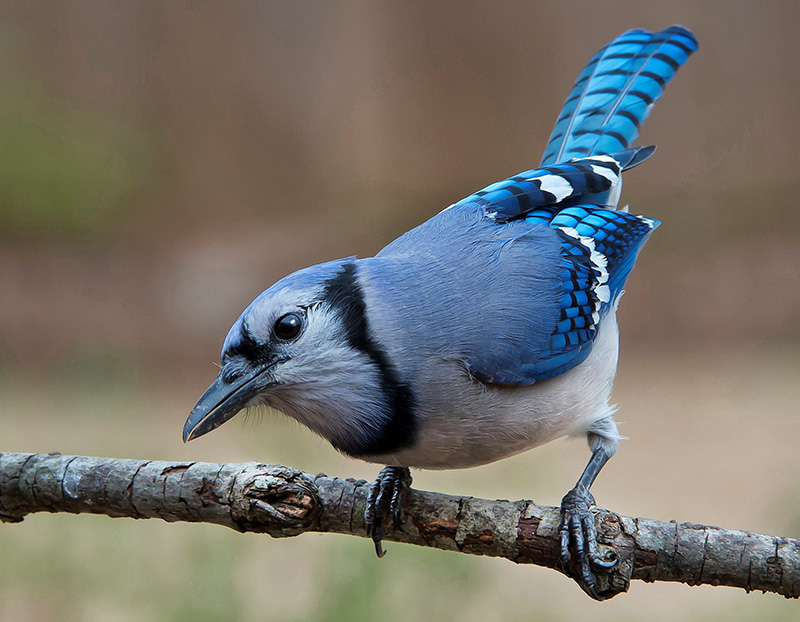 Blue Jay: Like most photographers, I can’t wait to see my photos so I “chimped” it onto my tiny LCD. When I saw it there on the screen, I could tell it was a keeper. It won “Best of Show” at a Smyrna photo contest judged by Bob Fitzgibbons. I thought, “Finally, Arthur Morris just might take a look at one of my photos.” 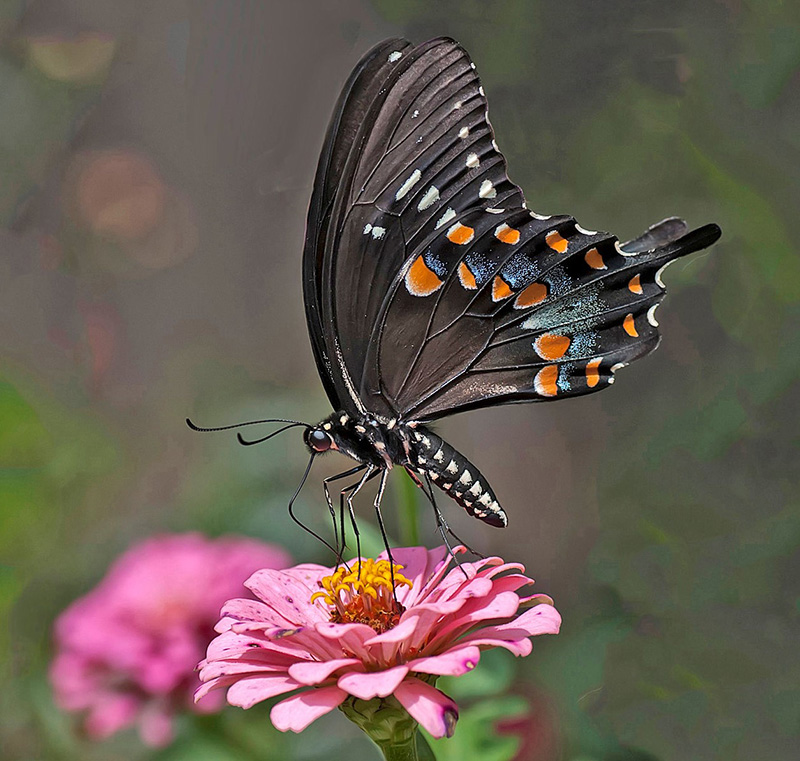 Spicebush Swallowtail Butterfly: This photo was entered in GNPA’s Double Vision contest a few years ago at Chattahoochee Nature Center. The photo didn’t win, place or show, but the lady who painted her version of it placed either first or second. To this day, it’s probably the sharpest photo I have ever taken. Absolutely no post-sharpening has been applied.