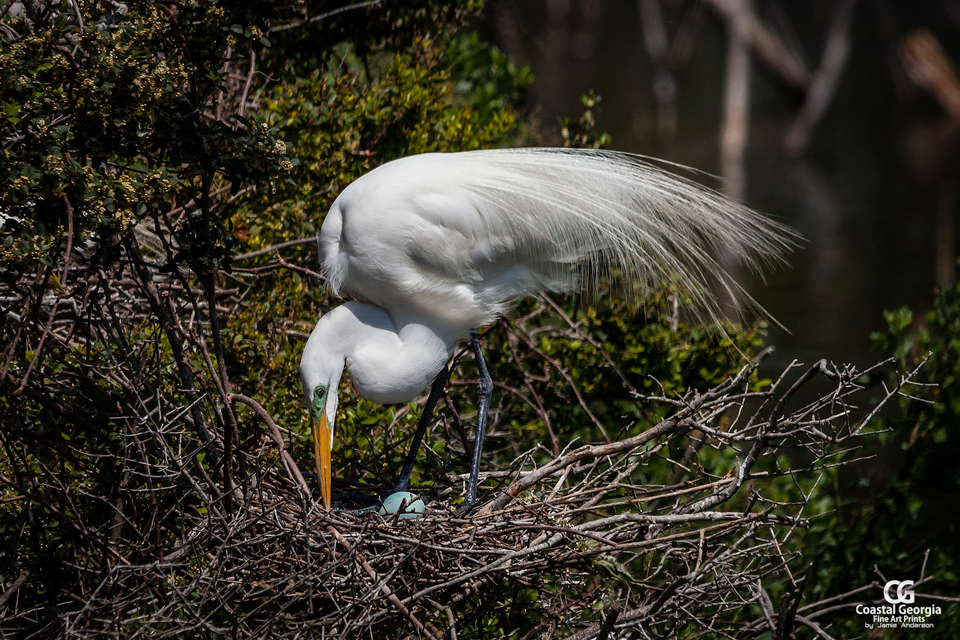 If you like photographing birds in a rookery during breeding season, Pinckney Island National Wildlife Refuge is a must-see place to visit. Paid GNPA Members can join the Coastal Chapter on March 26th at 7:30am for an opportunity to experience this rookery and photograph these beautiful birds displaying their breeding plumage and building their nests for the season. Click here to RSVP for the meetup. 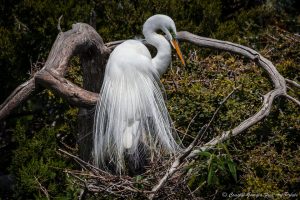 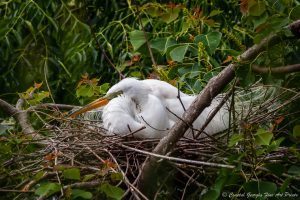 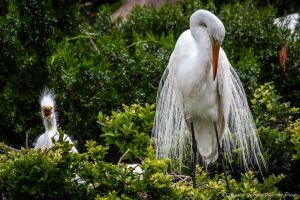 The name “Pinckney” comes from some of the original owners of the land. Charles Pinckney purchased the island in 1734. At the time the land was used for rice plantations. Charles Cotesworth Pinckney inherited the island in 1758. A two-story home with ornamental gardens was developed by Charles Cotesworth Pinckney but was destroyed by hurricane in 1824. A daughter, Harriet, inherited the island in 1825 and managed it and 349 slaves until 1860. The plantations were destroyed by the union during the Civil War and Harriet died in 1866. In 1869 the land was confiscated briefly for back taxes before heirs regained the land. Freed slaves lived on the land after 1862. Some were drafted in the army and served in the 21st Company, US Infantry. Some grew cotton as tenant farmers until the boll weevil killed the crops. In 1937 heirs sold the property to James Bruce, a New York sportsman and millionaire. He and his wife maintained the property as a hunting preserve. In 1954 Edward Starr and James Barker became co-owners of the island. In 1975 Barker deeded his half of the island to the U.S. Fish and Wildlife Service. In 1982, Pinckney Island National Wildlife Refuge was opened for public visits and today the refuge receives nearly 250,000 visits a year. 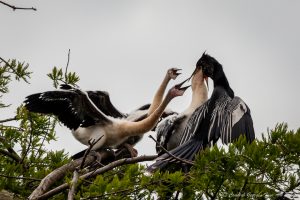 The best time for the breeding season is between March and July. In March the birds will be building their nests, displaying breeding plumage and rituals, breeding, and laying eggs. In April and May the chicks will be hatching and adult birds will be feeding the chicks. In June and July, the chicks will be fledging the nest. Once the birds leave the nest and learn to hunt food on their own, there is really no need to come back to the nest. They don’t need a nest to sleep in overnight and the nest really doesn’t provide shelter from the elements.

Pinckney Island National Wildlife Refuge is located on a spit of land in South Carolina between Hilton Head Island and the town of Bluffton on the mainland. It is accessible from US278. On US278 going toward Hilton Head Island, there are two bridges. The first bridge connects from the mainland to Pinckney Island. Turn left here following the signs before crossing the second bridge which connects Pinckney Island to Hilton Head Island. Follow the signs to the parking lot and trail head entrance. There are no restrooms or port-o-johns in the parking lot or anywhere on Pinckney Island. Travel is by hiking or biking from this point forward with one exception. There are free shuttle tours on Tuesdays from 10am-11:30am the require pre-registration. (See: https://coastalrefuges.org/https/www.coastalrefuges.org/event-3607707/). Otherwise, it’s about a ¾ mile hike to the Ibis Pond which is the first pond you come to. Here the main rookery is located. There is also a beautiful butterfly garden on the north side of the Ibis Pond. There are over 14 miles of hiking trails in the refuge altogether. If you can handle more hiking, the next pond up is the Starr Pond. Ibis and ducks are more common in this pond. Here’s a link to a complete trail map if you would like to plan out more hiking or biking: https://www.fws.gov/sites/default/files/documents/Trail-Map-Pinckney-Island-NWR.pdf . 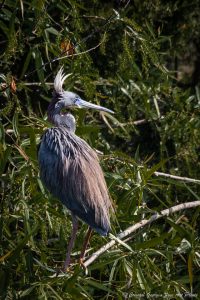 When planning a photography trip here, plan to use a long lens for bird photography. You can get very close to the rookery in the Ibis Pond but you are still separated from the rookery by water. So, for closeups, a long lens is preferred. Also, in bright sunlight, it is very easy to blow out all the detail in the feathers on white birds e.g. the Great Egrets and Snowy Egrets. For best results, use spot metering on the white feathers and make sure the meter is just under the +2 stop mark.

As always, keep safety in mind. Check the weather and plan for rain, bugs, and beware of snakes and alligators near the water’s edge.

Jamie Anderson is a nature landscape and wildlife photographer of the Coastal Georgia and the low country area. For more information about Jamie, visit: www.CoastalGeorgiaPrints.com .