From my perspective, successful nature photography is comprised of two very different elements. Understanding the role that each one plays in the process is critical. Capturing the photo is clearly important, but so is our thought process for presenting that image.

The camera, of course, is only a tool. Yes, it is the tool we use to capture nature images, but the tool itself does not create the image or provide the final presentation. Our own in-the-field experiences, our training in composition and the understanding of the elements of “good images” are the critical aspects for the capture. Composition, special light, depth of field, shutter speed and good exposure represent the craft of the capture. These should become second nature to you, so when a special nature opportunity presents itself, you are prepared to capture it.

Capturing moving animals and birds in flight requires good depth of field as well as a fast shutter speed to freeze the action. For flying birds, I typically use f11 at 1,000th of a second to capture sharp details from wing tip to wing tip. I will try to focus on the eye and use focus tracking for multiple captures as the bird or animal is moving. Also, I always shoot images in raw format. You can capture both raw and jpeg images simultaneously, but those raw images will provide many more pixels. And those extra pixels will give you the ability to crop the image and still produce quality prints.

Positioning yourself is also critical, but too often overlooked. Locate a position where the background is simple, distant, or shows an environment that brings special meaning to the capture. Then you are prepared.

Once you’ve captured quality raw images, the next step is determining your final presentation. This step is accomplished with software, not in the camera. Certainly, today’s cameras have very good software for adjusting light, shadows, color and more, but the best method is to simply capture the best raw pixels in the camera and then use software to enhance the captures. I use Photoshop, Topaz Modules, DXO modules and Luminar NEO to enhance my images. Those enhancements involve cropping, sharpening, color enhancement, vignetting, dodging shadows and burning some highlights. I use these tools to bring the eye of the viewer instantly to the main subject. Post processing is the difference between just presenting an image and presenting an image with real impact. 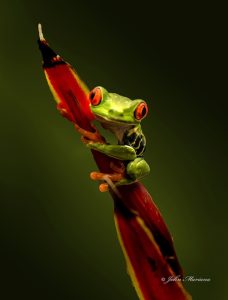 Darcy Elleby Pino conducts workshops in Costa Rica, where I assist her. This image (“I’m So Happy”) was one of several that I captured as a 3-inch tree frog was climbing a Bird of Paradise plant. Timing is everything with these opportunities. I made sure I had good depth of field for the frog’s body, and I darkened the background with a small amount of highlight behind the frog. The face is highlighted to bring the viewer’s eye instantly to the frog’s face. Compositionally, the frog dominates the center of the image, breaking the rule of thirds, but is in the upper third of the image. 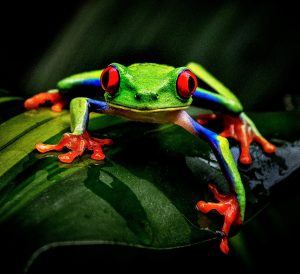 Images with instant impact are the most appealing. This image has been cropped, and the highlights increased, so that the viewer looks instantly into the face. This presentation also has increased contrast to emphasize the three-dimensionality of the frog and the entire image. The frog seems ready to jump out of the image. This elicits emotion in the viewer. Winning images are those that have great composition, instant impact and elicit emotion. 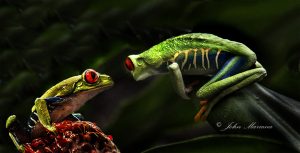 The next image (“Hi Honey, I’m Home”) is a composite made from two separate frog photos. I created this image to tell a story and elicit amusement. Still, the image demonstrates the use of highlights, dark background and good depth of field to capture the details. The very dark bakcground creates the three-dimensionality of the frogs. 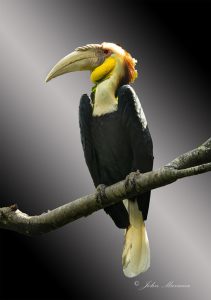 It is quite easy to capture a beautiful bird when it’s just sitting on a branch. This image was captured at a zoo, of a bird behind glass. However, it’s been enhanced in many ways. Originally, the image contained distracting branches, the background was not appealing, and the light was from above. Using the gradient background emphasizes the erectness of the bird. Meanwhile, enhancing the color of the head and beak immediately brings attention to the upper portion of the bird. 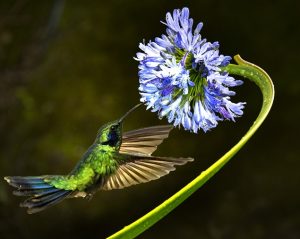 Hummingbirds are perhaps the most difficult bird to capture well. The best hummingbird images show detail in the wings and are difficult to capture. Understandably, depth of field and shutter speed are critical. Place yourself in a position where the bird has been flying and you have a good background and light. Then, patience and timing are required to seal the deal.

Note the sharpness of the wings, the body and the head in this photo. The curve of the stem on the flower brings the eye up around and back to the hummingbird. Capturing these tiny speedsters requires lots of time watching the same flower and waiting patiently as the bird flits around. But if you’ve done your homework, that patience will be rewarded.

From early September to late October, the male elks in Cataloochee Valley, Tennessee, offer a great opportunity for photographers. This is a prime location to capture big bulls as they gather their females. They often butt heads with other large elks to protect their territories. The best time to capture images is the early morning, just as the sun is rising and casting beautiful beams of light. This image is a panorama of three images as the elk turned to look at me. I had positioned myself near the open field because of the light rays there, and I waited. Timing is critical.

Early morning mist often fills the fields before the sun rises high enough to burn it off. This large elk stood very close to the female and searched for other females to add to his group. For this photo, I waited until the bull stopped eating, lifted his head and turned it toward the female. It made for a special moment. 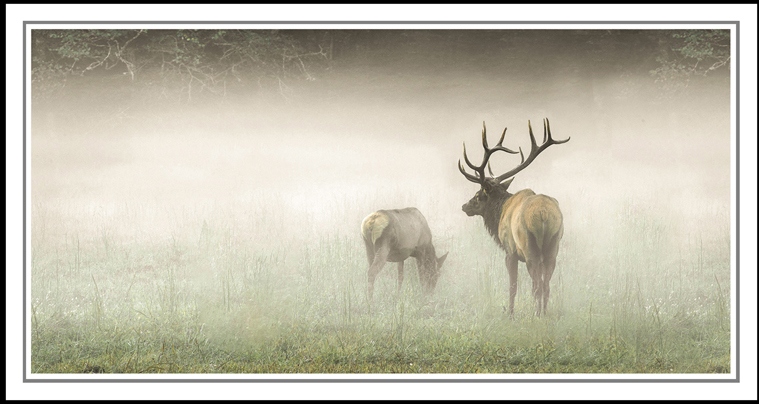 This image was captured during early spring in Cades Cove in the Great Smoky Mountain National Park. Again, I found the position I wanted, on a hillside with the farm in the distance and the sun creating a burst through the tree limbs. Patience, patience! I knew the location from previous occasions, positioned myself and waited. Eventually, a doe brought her young offspring into the pasture to feed. 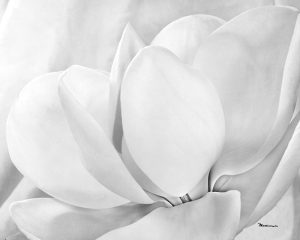 One of the most delicately beautiful flowers is the Magnolia. But the special beauty of this flower can be fleeting. Once the bud opens and the flower unfolds, it is pristine for only one day. By the second day the inner areas begin to fall out. I first tried to capture pristine magnolia blooms on the tree, but it’s very challenging to be in the right position at exactly the right time. So, I recommend removing a bud from a tree, taking it home and placing it in water. The next morning the flower will begin to open. Place it in front of a plain background, near an open window with soft light. With the camera on a tripod, make several captures at different levels as the petals are opening. This first image was placed against a white backdrop and the close-up capture emphasizes the beauty of the shape of the flower. 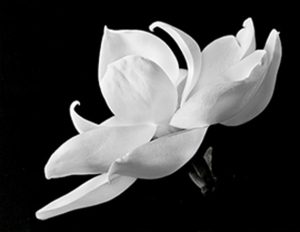 In the next photo, using a black backdrop emphasized the overall shape and beauty of the bloom. It was critical to preserve the detail in all the white areas. This was accomplished by utilizing very soft light from a side window. As the bloom continued to unfold, multiple images were captured. When all the petals have unfolded, a beautiful gold center pod is revealed.

Yosemite is one of the most beautiful of all the national parks, and I have visited there at least 50 times. As you enter the valley and look at the 2,000-ft.-high cliffs all around you, you understand why this park is so special. The Merced River runs through the center of the valley, providing great reflections of the famous mountains and waterfalls.

Winter is spectacular in Yosemite. The mountains are covered with snow, creating a stunning three-dimensional look, and the pine trees are highlighted by the clinging snow. Panoramas are the best way to capture the entire scene. Depth of field is critical for all the details from foreground to background. As I studied Bierstadt paintings, I discovered a compositional “must” for photographers. I call it “a place to stand.” When the viewer has a place to “stand” in your image, that viewer will feel the emotional experience of being there. But if there is not a place to stand, the viewer is only looking at an image. 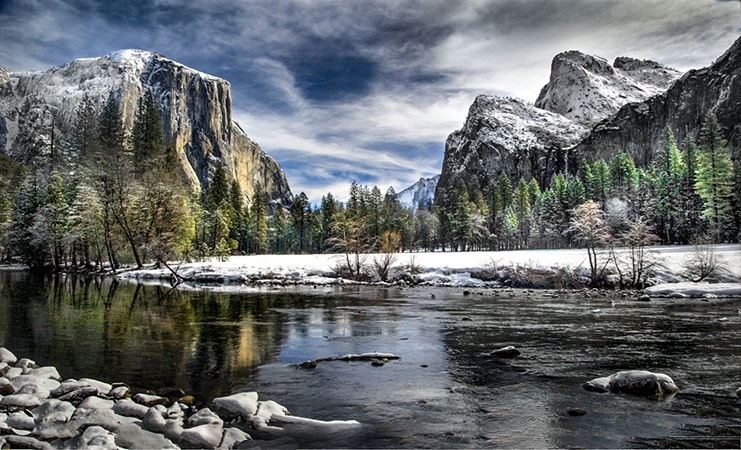 The coasts of Massachusetts and Maine are filled with special lighthouses, stretching from Boston through Acadia National Park in Maine. Morning light is very good for capturing these iconic structures, and late day can be special when the beams from the lighthouses can be seen against the darker sky of sunset. A A tripod can be used to capture several images at different exposures, with a high dynamic range image. This provides details in the shadows and in the highlights. You never want to have photos with “blocked up” shadows or “blown out” highlights. 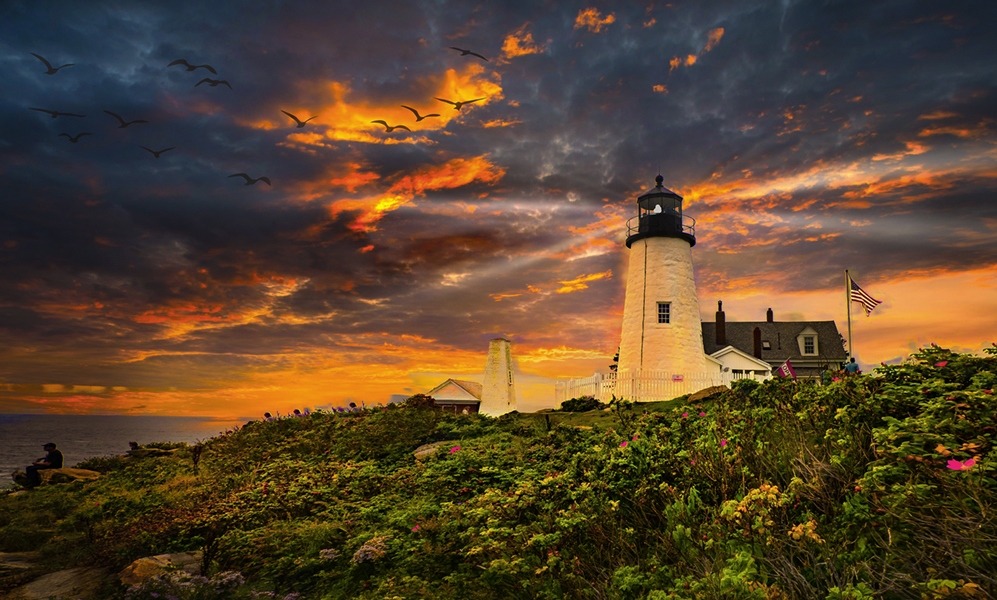 These are a few of the ways I approach capturing and presenting images. By concentrating on the nuances of these two different steps, I believe you can continue to improve as a photographer. 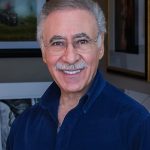 John Mariana is a well-known photographer and educator who has conducted numerous workshops across the United States, Scotland and Tuscany, as well as volunteering time to speak at functions, museums and photography groups. He has specialized in large print images and published two books. John is also a founding member of the Booth Photography Guild at the Booth Art Museum in Cartersville, GA. You can find his website at: www.marianaphotography.com