Photographing Elk in the Smokies 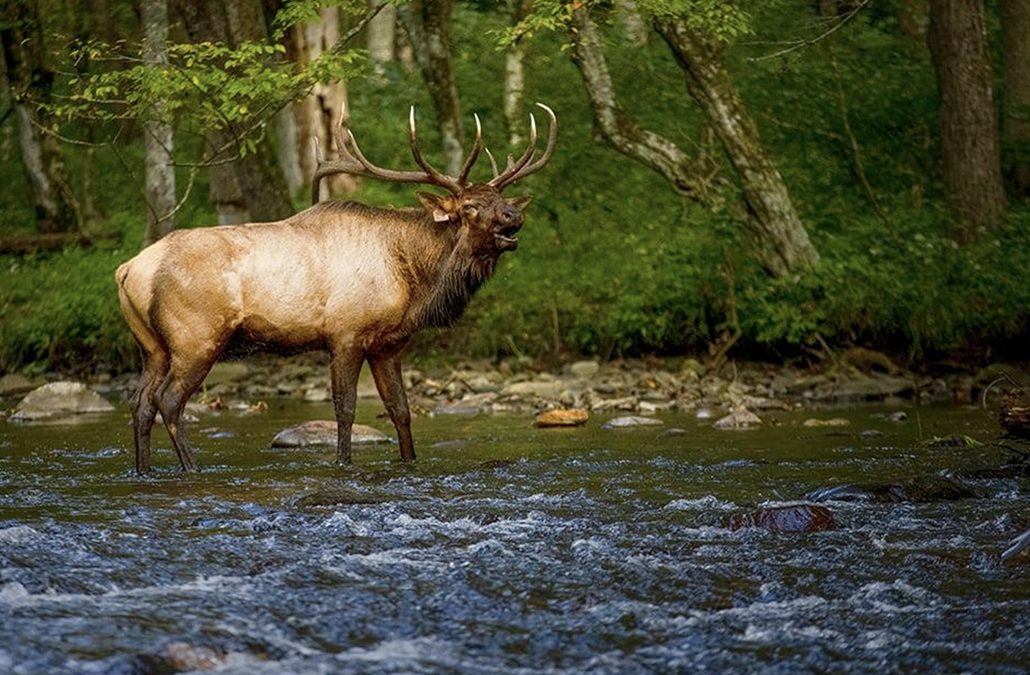 Big Bull in the River. Photo by Horace Hamilton

Photographing Elk in the Smokies

Few big-game animals are as awe-inspiring and majestic as wild elk. And while many photographers head to national parks in the West to find them, we are fortunate to have large herds a short drive from Georgia.

Let’s take a look at this remarkable herd in western North Carolina, as well as tips on the best places, times and strategies for photographing them.

But first, photographers need to understand that elk are the largest animals found in the Great Smoky Mountain National Park area. And while normally peaceful, they can be quite dangerous in certain situations. A cow elk weighs up to 500 pounds, and if she thinks her calf is in danger, she will defend it aggressively. A big bull, meanwhile, can tip the scales at 700 pounds. Amped up on hormones during the rut, he will use his massive antlers to drive intruders (including people) away from his harem of cows. These elk don’t perceive us as predators, so they won’t run from people like a bear or coyote might. In fact, they commonly approach humans so closely that the burden is on us to move out of their way.

Consequently, it’s critical that we maintain a minimum of 50 yards distance from all elk. Do not enter any field where elk are present, and be very alert when walking the trails around the Oconaluftee Visitors Center or other places where elk are common. Remember to watch for elk approaching from behind as well. Even if you are beyond the 50-yard yard limit, if an elk changes its behavior because of you, you are too close! Listen to the rangers and volunteers; their job is to keep you safe. 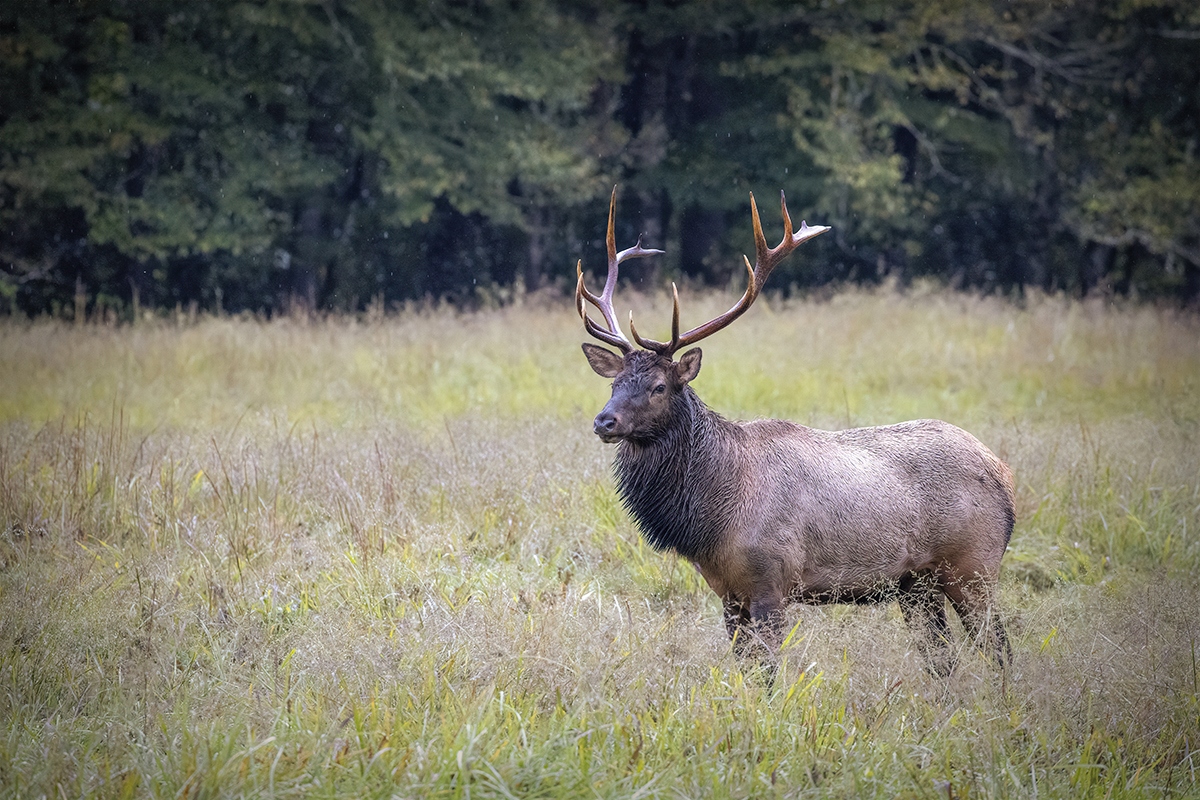 Elk in the Smokies

History
At one time, elk were prolific in East Tennessee and Western North Carolina. But they were eradicated in the 1800s by overhunting and loss of habitat.

In 2001, the National Park Service began a restoration program by introducing 25 elk from the Land Between the Lakes area (on the Tennessee/Kentucky border) into Cataloochee Valley. After the success of this first group, another 27 elk were added in 2003.

This original herd has flourished and now numbers 200-plus animals (estimates vary widely), spread across western North Carolina both inside and outside the National Park.

Life Cycle
Calves (usually only one per cow) are born in June, normally in a secluded area away from the main herd. But within days of birth, the cows return to the herd with their calves. Those calves will nurse for six to seven months, but from shortly after birth they also forage for other food, mostly grass. They are able to walk within minutes of birth.

Mating season (the rut) occurs in September and October (best observed from mid-September to mid-October). Bulls battle each other for dominion over their harems—groups of cows that can grow to 20 or more. Photographing the rut is so addicting that I have done so with a group of friends every fall for the past eight or nine years!

A dominant bull may lose up to 200 pounds during rut, as he spends his time and energy defending his harem rather than eating. As the dominant bull weakens toward the end of rut, younger bulls may have an opportunity to breed with any as-yet unimpregnated cows, thus increasing the herd’s genetic diversity. Elk have a life span of about 15 years. 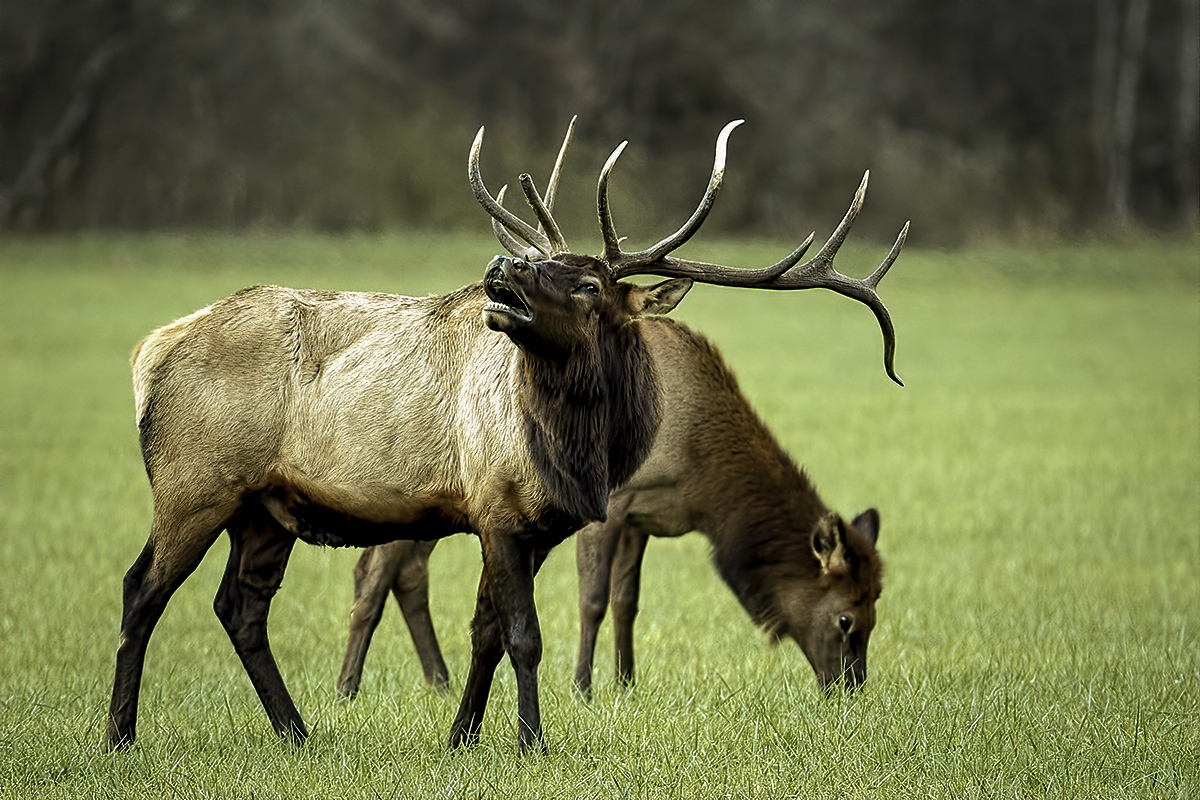 Where Can Elk Be Found?
There are two large herds of elk in the Smokies.

Cherokee, NC
The most easily accessible area to find elk is in and around the town of Cherokee, at the entrance to the park on Highway 441.

Watch for them in the fields along Hwy 441, from the entrance to the Blue Ridge Parkway and north to the Smokemont Campground. If you don’t see them there, look in the fields in the Job Corps Center, which can be accessed via a bridge over the river, about 100 yards north of the exit from the visitor center parking lot. There is limited public access in this area, so pay attention to the signs.

Finally, elk can be found along Big Cove Road, which is accessible from Hwy 441, between the Blue Ridge Parkway and the town of Cherokee. Watch for directional signs. Elk also frequent the Cherokee Trail, behind the Oconaluftee Visitor Center. Patience is required, but this is a wonderful place to photograph them as they cross the stream in the afternoon.

You can access Cataloochee from Hwy 276 at the intersection with I-40 (Exit 20). Turn on Jonathan Creek Road, which is immediately before the I-40 intersection and only goes west. In 0.3 miles keep right and follow this road into Cataloochee. After about 10 miles, turn left at the stop sign and continue straight from there into the valley. The drive from Hwy 276 into Cataloochee may take up to 45 minutes on a narrow, winding mountain road that turns to gravel before entering the park. There are no visitor amenities in Cataloochee, other than bathrooms. There is no cell service. 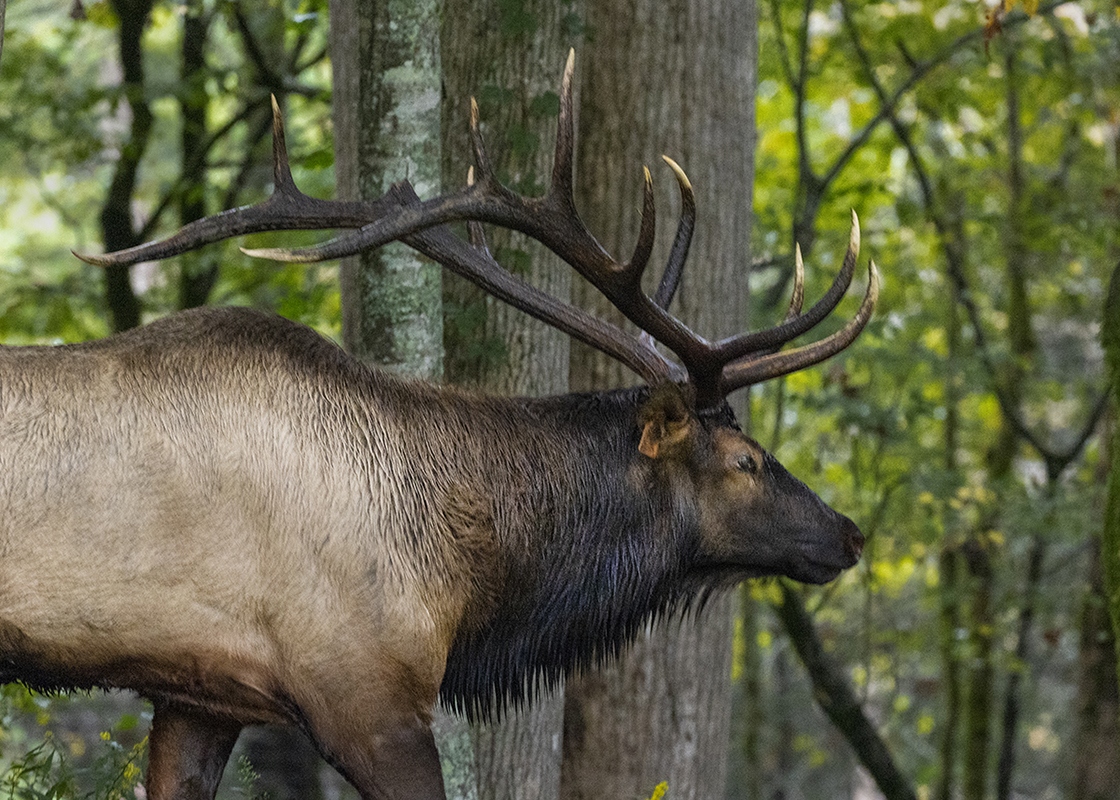 While the Cherokee herd tends to stick pretty close together, the Cataloochee herd can be spread throughout the two-mile-long valley, in smaller groups of 10-15 animals. Beautiful landscape scenes – including elk – can be found in the Cataloochee Valley at sunrise.

Other Locations
In addition to these primary locations, elk occasionally can be found in downtown Cherokee, along the Blue Ridge Parkway, in Maggie Valley, Bryson City or most anywhere else in the area. Be on the lookout when driving in these areas, but remember that these are not the most reliable locations for finding elk.

Is There a Best Time of Day?
In early summer, in the fields along Hwy 441, cows and calves are often seen throughout the day. But early morning and late afternoon are always the best times to view the herd.

During the September and October rut, elk are most active at sunrise and shortly thereafter, or in the late afternoon. The rest of the day, they tend to be found grazing in the fields. During mid-day, they are often in the woods and difficult to find. 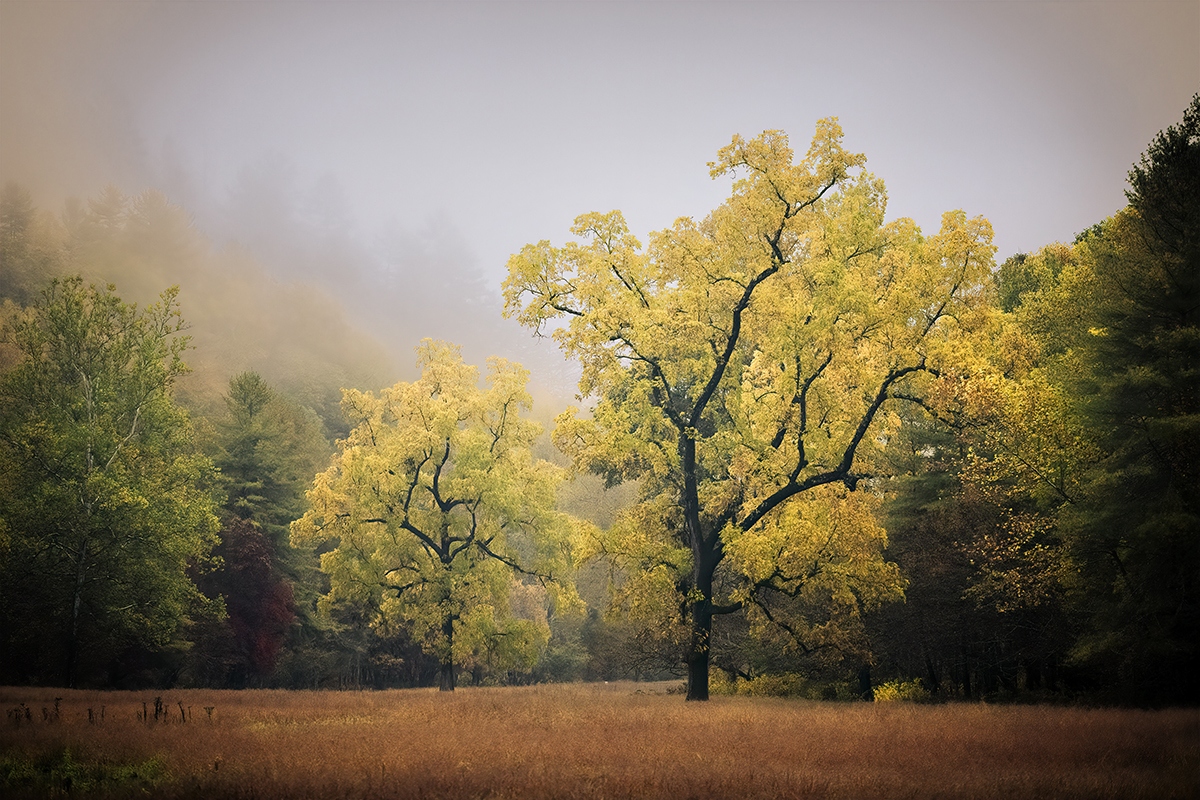 The Photography Experience
Finding elk in the Smokies is one of the most exciting photographic experiences that I have enjoyed anywhere. From the loving relationship between a cow and her calf, to the testosterone-fueled battles between big bulls, to the magnificence of a bull crossing a stream in Cherokee, to the incredible beauty of wispy fog in the yellow walnut leaves in Cataloochee, you can find endless possibilities for photography.

Landscape opportunities also abound in the area. Cataloochee Valley is great for foggy landscapes at sunrise. The Blue Ridge Parkway has many beautiful places to view sunrise and sunset, and you’ll discover streams and waterfalls. Black bears are often seen too (although not nearly as often as in Cades Cove). 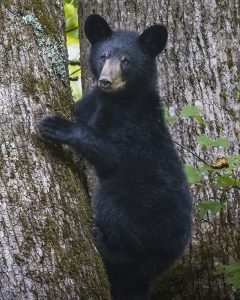 Equipment
In most cases you will want to use a long telephoto lens, 400mm or more, mounted on a tripod. You can also use your widest angle or mid-range lenses to capture landscape images at Cataloochee. Another useful item to bring is a collapsible seat to help you stay near eye level with the elk while waiting for action in the fields. Bug spray, sunscreen and rain gear are also important.

Weather
Mid-day temperatures during rut are usually mild, but mornings and evenings can require a jacket or sweater. Precipitation is common, so bring rain gear for you and your equipment. If you plan to go to nearby places like Clingman’s Dome or Blue Ridge Parkway for sunrise or sunset photos, plan on much cooler temperatures and windy conditions. Summertime temperatures are warm; winter is cold with a risk of snow.

Getting Help
Rangers can be found at the visitor center at Cataloochee during all open hours and are very helpful. They can possibly help you locate elk, if you are having difficulty. Volunteers (look for their bright yellow vests) are another great resource, but they are most often found where the elk are present. You will find them to be very knowledgeable about elk. Most have worked as volunteers for several years and know a lot about individual animals and their habits.

I’d encourage everyone to make plans to witness this wonderful treat in North Carolina, just a few hours from Atlanta. This not an experience that requires stealth or hours of sitting in a blind; you can go with friends and make it a social event. I hope you enjoy it as much as I have. 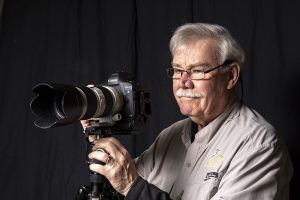 A past president of GNPA, Horace is also a former board member and the founding coordinator of the Gwinnett Chapter. He’s been photographing nature for more than 40 years, and has served as a jurist for numerous photo exhibits. He has also conducted training classes for GNPA and camera clubs across Georgia. The Great Smoky Mountains National Park is one of his favorite destinations, where he enjoys photographing its animals, landscapes, streams and flowers.