Ever since video capabilities were added to smart phones in 2007, the popularity of videography has soared. Nikon introduced video in its D90 model in 2008, Canon followed suit with its 5D Mark II, and now virtually every camera allows you to shoot video.

Even so, many photographers’ experiences with videography are still limited to their cell phones. That’s unfortunate, because today’s DSLR and mirrorless systems provide far more versatility than phones, as well as higher-quality video performance. If you haven’t taken advantage of these capabilities in your camera, you should.

Extracting a Photo from Video

Each camera has its own settings for video functions, including resolution quality based on pixels.  Typically, those include full HD (high definition) video, which provides an image of 1920×1080 pixels per inch. But higher resolution (i.e., more pixels per inch) became common after 2012 when the Canon EOS 1D C introduced 4K video (about 4,000 pixels per inch), and Panasonic brought 4K to mirrorless cameras in its Lumix GH4 in 2014. Nikon’s first 4K DSLR was the D500 in 2016. Now, 4K video is common in most cameras (and some can even shoot 6K and 8K).

These increased resolutions created the ability to extract high-quality still images directly from your video. Recording at 24 or 30 frames per second, video images can capture action must faster than the frames-per-second rate for burst shooting. It can also do so for much longer periods of time, achieving 30 or more minutes of continuous shooting. This provides potentially hundreds of individual images within an action sequence, offering the ability to find that one “special” shot.

Bringing your video into Lightroom or Photoshop is pretty painless, and you can easily scan forward and backward, frame by frame, to choose a still image. Then, using the sequence of Edit>Copy>Paste>Save, you can save a single image for additional processing. With 4K video, your frame will be about 8.3 megapixels, which is easily adequate for an 8×10-inch image at 300 dpi. But if your photo is not going to be viewed in a “nose-to-image” environment (such as in a gallery), you can go much larger, likely up to 15×30. If you’re shooting 6K video, a single frame will be about 18 megapixels and allow a 10×20 image at 300 dpi. And with the latest AI plug-ins such as Gigapixel, you can enjoy substantially higher quality in these bigger enlargements.

For example, when shooting at a popular south Texas ranch a few years ago, I had focused on a dragonfly that was repeatedly landing and taking off, at some distance from our blind. When I viewed the video later, I realized that what I had not noticed through the lens was why the dragonfly had been making such frequent fly-arounds and landings. As the image below shows, the dragonfly was being attacked by a pair of parasitoid wasps, commonly called “dirt-daubers.” Had I been shooting single or burst shots, it is very unlikely that I would have captured this specific action, since it was a very brief moment in about three minutes of video, or a single frame out of about 4,300. 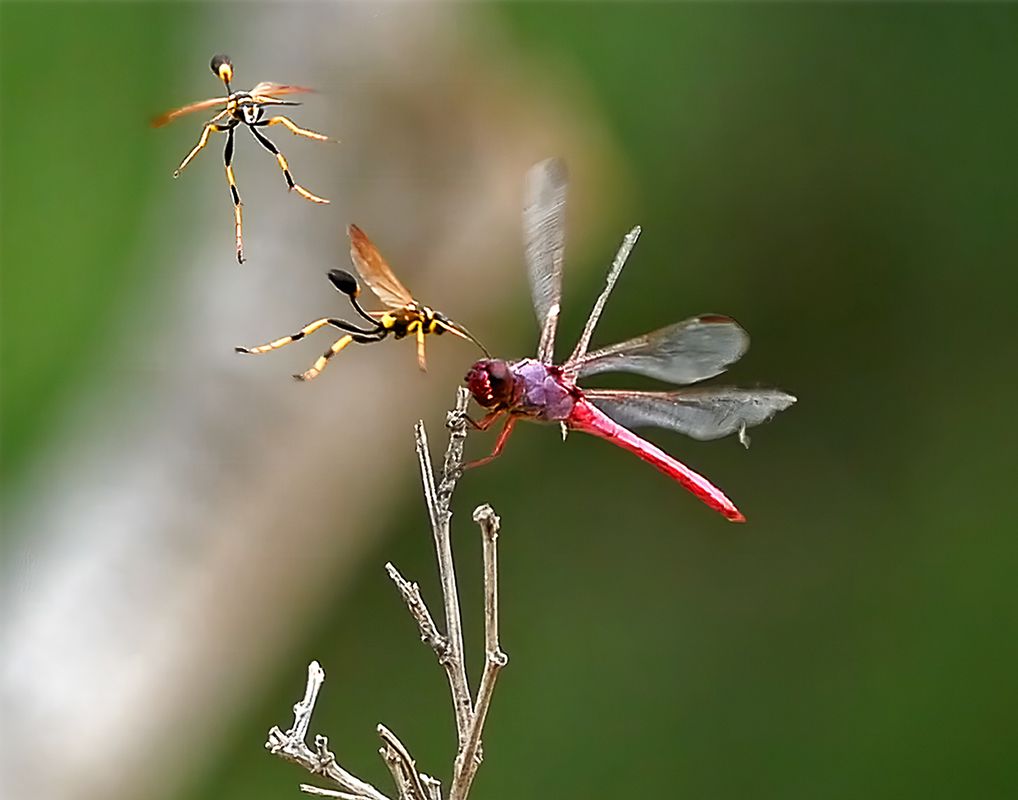 To achieve conventional focus stacking, you typically use a tripod to capture multiple shots of a scene or subject – at slightly different focus points for each shot – and then combine those images into a single, completely focused photo that shows the subject in full depth of field. This can be done manually by repeatedly adjusting the focus through a successive series of shots taken as cross-sections of the scene or subject. These are then transferred into other software (such as Photoshop, Helicon Focus or Zerene Stacker) for post processing.

More recent cameras – including several Olympus and Panasonic models, Canon EOS RP, and Nikon D850, Z6 and Z7 – can actually complete this stacking process in-camera. In either case, the successful finished image requires that every fraction of the scene or subject be captured in focus before being “stacked” together. Skipping any cross-section or plane of focus will noticeably reduce the quality of the final image.

Video focus stacking, on the other hand, avoids the need to take all those individual shots, and assures that all cross-sections are captured, in focus, and included in the stack of images. The process, as with any focus stacking, works best with the camera on a tripod. Simply set your focus point at one extreme of the total depth of field, such as the nearest portion of the subject. Press the record button to begin the video and then, as you’re recording, carefully turn the focusing ring all the way through the complete depth-of-field that’s needed for the subject. Turning the focusing ring through the entire focal range, without moving the camera, may take a little practice at first. Once you reach the other end of focal range, stop the video.

Post processing can be done in Photoshop, Zyrene or Helicon, but only Helicon is ideal because you can import the video directly into the software to render your final image. As seen below, Helicon has an “Open Video” tab, which is used to import your video stack into the software. 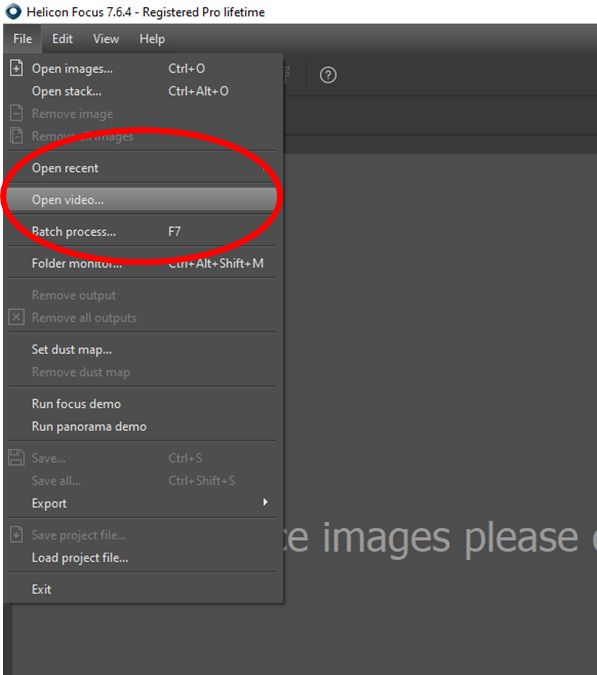 Then, by clicking on the “Render” tab in the lower right corner (above), the final transformation takes place, as all the individual video frames are merged into a single image with full depth of field. The resulting image can be saved and processed just like any other photo.

This video shows the complete video sequence of a pitcher plant in Maine. The final photo shows the resulting image, captured in Helicon from over 250 video frames. The software rendered this final image in less than 25 seconds.

As you can see, creating single images from video – whether from a single video frame or via focus stacking – opens up some fascinating options for nature photography.

Tom Simpson grew up in Nashville and earned biology degrees from MTSC, LSU and FSU. Following service in the Army Chemical Corps and academic positions at Wake Forest and Agnes Scott College, he began a 40-year career in environmental consulting. Now retired, his photography interests include photomicroscopy, macro, landscape and wildlife, with particular interest in nature videography. He shoots primarily with Panasonic mirrorless cameras. His family includes his wife, Cindy, three daughters and seven grandchildren.